It has always surprised me how many people hate being photographed!

There are a lot of reasons why we don’t like photos of ourselves but surprisingly one of the most common reasons is we are simply not used to look at ourselves from the other’s point of view.

How many people here like to hear their recorded voice?

Often, we get a similar feeling when we look at photos of ourselves. Generally, we explain this reaction as the image that we see in the photo is flipped compared to our mirror reflection. When we see a picture of ourselves from the opposite perspective, none of our features are where we are expecting them to be. It makes us feel uncomfortable. That photo is of me, but it doesn’t look like me! Since we see ourselves most frequently in the mirror, that is our preferred self-image.

So, you can blame the mirror!

However, the actual reason is not the mirror but it is the effect called mere-exposure. “The mere-exposure effect is a psychological phenomenon by which people tend to develop a preference for things merely because they are familiar with them.” In simple words, the more we exposed to something, the more we like it. A lot of those things come from our childhood. That’s why I don’t eat vegemite!

Unless you have a perfectly symmetrical face, people see your face differently than you do in a mirror. That’s why you checked yourself in the mirror in the bathroom, then took a photo… and….

Have a look at my flipped image: 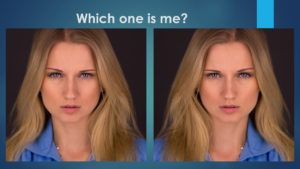 I have a pretty symmetrical face but I still see a massive difference when I flip the image. It’s a strange feeling. Looks like me but it’s not… Funny enough the psychology works the opposite way with me – I’m so used to seeing photos of myself that when I flipped the image to match my reflection in the mirror, I actually like it less…

So, based on my own experience I can definitely state that the more photos of yourself you have, the more familiar you are with your appearance in the pictures, and the more you like them!

Anyway, the moral: the more pictures of yourself you have, the more you will like them…

I don’t claim it to be a universal rule but it does work for a lot of us.

So, grab your phone, flip one of your images now, and let me know which one you like more!

How to Feel Confident in front of the Camera
Next Post
How to handle negative comments?
Previous Post
7 Tips for Looking Great in Bikini Photos

Great article, Yana! As a photographer I very often flip my clients’ images and often they like them more 😉

This is great information! Thank you so much! I’m learning a lot 🙂